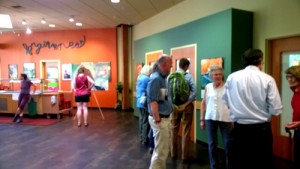 On a beautiful June day, Recovery Café hosted its first ever Artist and Writer Showcase featuring 31 pieces of art and 11 spoken word performances. Over 100 people attended this wonderful event, marveling at the variety of art Members created in art classes through the Café’s School for Recovery and listening to moving spoken word performances performed by the Members that wrote them. Below are some photos of some of the art pieces and a piece that Megan McInnis wrote that started off our night.

We hope you will be able to join us for our next one!

The Kindness of Strangers
by Megan McInnis 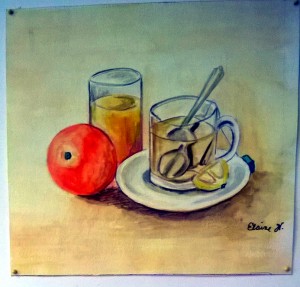 Fortunately, no one at the bus stop tried to talk to me. Like typical strangers, the waiting passengers gave me and each other more than enough space. Perhaps we do this out of mistrust, or shyness, or even what might be considered respect: “I won’t talk to you if you don’t talk to me. It’s only polite—and, besides, you might ask me for money.”

Especially on the bus, this distancing is critical: we’re trapped. Avoiding eye contact is a matter of life and death. You may not escape having someone sit next to you, but at least you can discourage conversation.

I don’t exactly approve of this unfriendliness, but I can’t quite condemn it. I once had to sit near a guy who, after asking what I was reading, reached out to borrow it, flipped through the pages, and read parts aloud, making criticisms. (I wasn’t surprised when he mentioned he’d recently quit taking lithium.) That’s the kind of thing that can happen if you look up even once.

Getting off the bus, in the city, you’re safe again because even if you glance at other people they won’t look back. At least that’s true in some areas, like the one between my bus stop and here. It’s reassuring but also kind of hurts my feelings, because I see a few people I’d almost like to risk smiling at but they won’t even meet my eye. I have to admit I don’t try very hard; the odds of rejection are high, and I can’t afford to be cavalier about exposing myself to pain.

For the first few blocks, the streets were owned by business people. They moved in gangs, speaking powerfully, on their way to meet powerful people at power lunches. You could almost see the cubicles they’d built around themselves, moving along with them to keep out all irrelevancies. (Others walked singly, with headsets, focusing just as intently to the exclusion of their surroundings. Their juxtaposition with the mentally ill, who also conversed with invisible people, was nothing short of eerie.) Concerning the mutual lack of acknowledgment between these people and me, my feelings were unmixed, containing no tinge of the regret I have in not connecting with others. 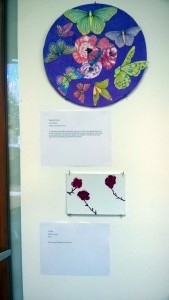 Besides all the business folk were other people with haircuts and outfits or attractive dogs or well-dressed babies, and they, too, seemed self-contained —content in not interacting with strangers. That wasn’t so bad. It was being ignored by the streetwise, hard-living crowd that bothered me most, because I imagined they had the contempt for me that I had—I admit it—for the powerful people. I wanted to tell them, “No—I have street cred. I’ve lived in a car and peed outside and been harassed by cops. I only look like this ’cause my mom buys me clothes.” I wanted these people’s approval—so it still came to that. I wanted someone outside my own head to tell me I had a right to exist.

Toward the end of my seven-block journey, I turned a corner and there it was. Not the Café—I hadn’t even noticed it yet, across the street—but something almost as solid and palpable. I had a sense of finding the promised land of Reepicheep the mouse, from the Narnia series: “Where sky and water meet, where the waves grow sweet . . .” The waves had grown sweet. The people around this corner were happy, and friendly—if not directly to me, then to each other—and the waves rippled out and licked my toes, and I didn’t feel like the people were trying to keep that energy from me. Some of them, when I passed, still had their smiles from the last contact, and didn’t put them away.

The closer I got to the building, the more of the comers and goers nodded at me or said hi. Someone held the door open—not out of obligation but more like he knew me, as a regular. The desk people smiled like they’d been expecting me—not like the “greeters” inside certain stores, who are really just watchers. When someone asked if he could help me, he meant something different from when people ask that in stores. It wasn’t a euphemism for “Look, we can both pretend you came here by mistake, and you can leave unescorted if you leavenow.”

Clearly, this guy really wanted to help me—not just help me leave. He seemed to be saying, “Can I be a part of improving your life, or point you to someone who can?” And the thing is, he wasalready helping me, by treating me like that. Ifelt that he and the rest of the staff could see me, and were glad to see me, and that, here, I had value.

It turned out this cheerfulness didn’t come only from the people with nametags. Others were walking around or sitting at tables talking together, or laughing, or yelling across the room to each other like longtime friends at a party. And when I squeezed in beside a guy to get some coffee, or asked where to put my empty cup, they were as welcoming as if they knew I’d arrived with one of their friends. Some of them offered their names and asked for mine, as if taking for granted they’d see me again. I was already in.

When I left that day I was like the people I’d seen when I came: smiling at all the other members coming and going, and feeling a smile at the ready, just behind my face, for a long time after. 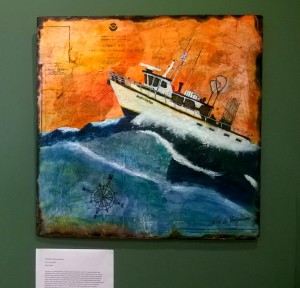 Walking back to the bus stop—sometimes bursting into a run—here and there I tried to catch someone’s eye and smile at them, but they looked away for the most part, almost as if to save me embarrassment for what might have been a facial tic. Sometimes just before looking away they smiled kind of curtly (or that’s how I took it), not quite meeting my eye. That shook my confidence a little, so at those times I tightened my smile into more of a grimace and wrinkled my eyes a little as if I were merely squinting into the distance. To save face. Because I’ve only justbarely started recovering, and little things still hurt a lot more than they need to. But that day marked an important new stage of my recovery.

I never have depended on the kindness of strangers, but I’m finally starting to.