Learn about our Membership requirements and our COVID protocols
Contact Donate
Skip to content
Home / Café News / Welcome Back, Rick

Please join the Recovery Café Community in welcoming Rick Crawford as Associate Director of Resource Development. Rick was our Resource Raising Intern from April to September 2013, helping with grant writing, database management, developing policies around charitable giving, organizing GiveBIG, and working on logistics to support our Standing in the Gap fundraiser. “When I first came here, it was a classic Café story,” Rick says, “Killian ran up and hugged me and I felt welcomed. That kind of atmosphere – the warmth, love, excitement and support is something I hadn’t experienced at other organizations so I jumped at the opportunity to ret 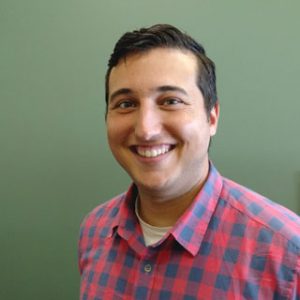 Rick, like several of our team members, is a former Jesuit Volunteer (JV). He completed his JV year of service in Baltimore as a case manager with the Beans and Bread Outreach Center, an agency providing 300 homeless individuals a day with warm meals, hot showers, affordable housing, employment referrals and other essential resources. Rick discerned that he was better suited to administration rather than direct service so he worked to recruit and train a team of fundraising and finance interns, and cultivate individual donors for an Oregon-based political campaign. During a brief weekend trip to Seattle, Rick was invited to attend an open mic night at Recovery Café. “I was impressed with the Members’ talent, the enthusiastic crowd and the MC that night, Richie.”

Rick subsequently moved to Seattle to pursue a Master of Public Administration at the University of Washington. He reconnected with David Uhl, who he met when David was a support person for the Jesuit Volunteers, and completed the graduate program’s 400 internship hours at Recovery Café. We are privileged to welcome him back to our loving space nearly three years later!

Let’s get to know Rick:

Fact 1: Rick is an avid outdoorsman with an obsession for mega-fauna, animals that weigh more than 100 lbs. His goal is see every North American mega-fauna species in their natural habitats. He’s seen 12 this year, including 5 new species: black bear, grey wolf, bison, moose, and prong-horned antelope in the wild.

Fact 2: Rick is getting married in May 2017! He and his bride-to-be are planning to backpack and hike off the beaten path for their adventurous honeymoon.

Fact 3: One of Rick’s favorite things about finishing graduate school is that he can read whatever he wants and is no longer confined to a course list of textbooks. Rick is currently expanding his sci-fi library and he’s on book 3 of 155 of the Star Wars expanded universe series.