Jay believes that everyone is coded at birth with a pre-determined destiny. And his journey was majorly altered in infancy with his adoption. “My adoptive mother told me that I was special and she chose me,” but his adoption left a vacancy in his heart. “I was living a life borrowed because from that point on I was on a different path.” In adulthood, Jay’s new path led him through the metaphorical and drug-induced highs of a lucrative career on Wall Street as a financial consultant with Merrill Lynch in the ‘90s and the extreme low of witnessing the 2001 attack on New York’s World Trade Center. 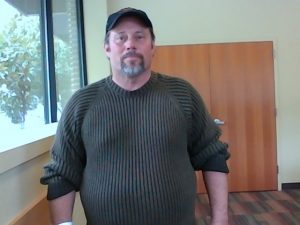 “Things started falling apart,” he shrugged, “I had marital issues and the division that I worked at with Merrill Lynch closed down.” Perhaps inspired by the events on 9/11, Jay left his job in finance to become a full-time firefighter. Unfortunately, after a string of disastrous injuries including a broken back, knee, and neck; and surviving several colleagues’ suicides, he decided he couldn’t continue that line of work; Jay tried to self-medicate his sadness with alcohol and ended up unemployed and homeless.

“Getting knocked down in life is a universal human condition,” said Jay, “It’s the getting back up that’s hard.” He decided to travel to the Northwest for more opportunities and stumbled upon Recovery Café shortly after moving to Seattle in January 2015. After a few false starts, Jay decided to begin his recovery journey. “The first 24 hours of sobriety are an amazing accomplishment,” but Jay asserts that getting past that point is the difficult part. “It’s about committing your heart to the decision to feed the ‘good animal.’” Jay chose to share his journey with us because, “there isn’t one person here who wouldn’t do anything for you.”

Admit your frailty and seek help, and surround yourself with good people…You can’t do it alone, without the help of friends that will lift you up. Recovery Café staff can continue being genuine; fake help and perfunctory help are easy to see and see through… Attach yourself to someone who cares; keep asking for support and keep .

Jay was connected with FareStart’s adult culinary program through Recovery Café’s referral services and was able to restart his life with a career in food service. Jay is now gainfully employed as a chef. “Every single day, I tell people about Recovery Café and FareStart,” Jay said. “People ask me for a dollar and I hope to help them by passing on the information.”