The Healing Power of Art

Seemingly displaced from 16th century England, Queen Elizabeth I saunters through Recovery Café’s front doors on Saturday night with an aristocratic grace befitting a Tudor monarch celebrating her accession to the throne. She smiles haughtily through rouged lips and thick white makeup already showing laugh lines through the foundation. Her coifed wig is adorned with meticulously placed faux pearls. A flowing white cape and freshly starched and pleated ruffs around her wrists compliment her embroidered royal yellow gown. 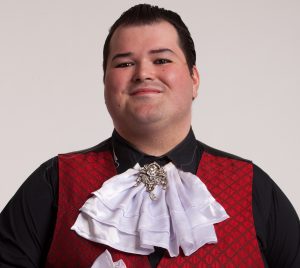 She is one of Allen’s many personas he fully embodies to entertain as master of ceremonies at Recovery Café’s Open Mic Night. And like any great method actor, he doesn’t break character until the talent show wraps up. Allen is a gifted illustrator, poet and dressmaker and his art is deeply healing to himself and others. His poetry is proudly showcased in our publication, “Words from the Café,” a compilation of Members’ poems and stories written during the Safe Place for Writers Circle – a sanctuary within the wider Café community for writing stories and poems about Members’ lived experiences. Our Café community has embraced all sides of Allen and celebrates his extraordinary talents. “It’s helped me feel normal and accepted,” Allen says of the Café. When he is in character, the tragedy in his life melts away for just a few precious moments until his real name is called. Then the spell is broken.

Allen was never able to have closure from the traumatic loss of several important relationships and, most importantly, the loss of his mother. “I feel relief from expressing my feelings through [characters] without telling people these are real candid emotions expressed through entertainment,” Allen says, “because of what I’ve endured and what I’ve survived, the best way to tell my story is through the veil of performance.”

Allen reveals that Open Mic is also a sad moment because he’s expressing hidden feelings and emotions that he couldn’t express when he’s simply himself. ‘The Countess,’ for instance is a recurrent character whom Allen recreates on many different canvases. “The living breathing emotions behind her eyes” are conveyed through acrylic and digital drawings, epic and short stories, and poetic prose. “With the Countess, I’m stronger,” he says. She represents a vivacious and resilient nature Allen wishes he could emulate. He draws from her strength to overcome barriers in his own life. Moreover, he can give each character the happy and triumphant ending that he cannot have.

It’s with my pain from loss, rejection, and not being accepted that has flourished and nourished my creativity, but most of all it was the betrayal of my heart and the permanent damage that keeps me going in the world that I’ve created.

Allen’s current project, a 24”x 30” acrylic painting temporarily stored in the Café’s Art Room, is the likeness of an austere woman in luxurious Medieval garb. She is regal, conceited, and shrewd. This is a stylized portrait of Allen’s late mother. She is portrayed as an evil queen clutching a mirror because he remembers her being “vain, scared of death, scared of downfall, scared of rejection.” Another of Allen’s portraits in the Art Room is called “The Lady in Red.” It is the self-portrait of the Countess inspired by Allen’s facial features. “The Lady in Red” will be refinished and redrawn on canvas and Allen’s mother’s portrait was featured at Recovery Café’s 2017 Art Show on June 26th. One of Allen’s remaining challenges is adding a new character to his repertoire to feature at Open Mic Night.

One challenge Allen is working on is conquering his portrayal of the Phoenix Emperor, a character from his book that has characteristics of Elizabeth I and the famous, and only, female emperor of China, Wu Zetian. This character will be challenging for Allen to portray because he will have to express and embody the cold heartedness and anger that define the Phoenix Emperor. “This character’s story has similar sufferings to my own, the only difference is that I conceal and change my suffering. This character uses her rage to give strength, but we both use it to achieve great success. To become this character in the flesh would mean bringing out the emotions of the past that I’ve concealed.” The Phoenix Emperor represents dominance, power, and has a personality that can terrify. Allen shares that toning the character down but trying to keep the originality of the character will be the hardest aspect of his portrayal. “I am both looking forward and terrified of this project, but it will be a long process before the Phoenix Emperor ever appears at Open Mic.” In the meantime, one other new edition, Veronica Velvet, a character that symbolizes a new chapter in Allen’s life, will be making reoccurring visits during Open Mic.