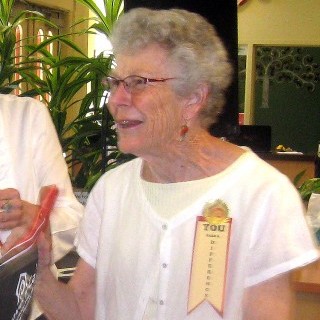 On the surface, it’s not obvious.

It’s not obvious why the bright-eyed, cheerful woman before me is such a natural fit for the role of Minister of Presence here at the Recovery Café. Until just a couple of years ago, Mary Ann Knowles was a homemaker, capably running a comfortable household in one of Bellevue’s lovely, leafy, water-view neighborhoods. She’d trained and even worked briefly as a nurse, but that was before she and her husband Bill brought their seven children into that safe, well-tended world. She’s eighty-three years old now; Bill has been gone for more than a decade, and the children are well into middle age themselves.

Can that sort of life really prepare a person to bring an open heart and a listening ear to a place like the Café? Of course it can. Because humanity is general – we don’t know one another by checking the boxes for income, address, or resume. Mary Ann’s real story, as it happens, is pretty good preparation for her work here. She gave me the basic fact right up front.

My husband was an alcoholic . . . so that was my connection and one reason I was interested in this place.

Her own life, in other words, has been evidence that what’s on the surface means nothing. That applies to the well-off, the well-groomed, and the well-insured as much as it does to the person with no resources and nowhere to turn. We are all more than whatever is visible.

I don’t even know when I first knew that he was drinking too much. Because he drank at home. He didn’t stay out somewhere. He didn’t cause any real problems . . . he’d fall asleep.

But it got to the point where I couldn’t stand hearing the ice cubes when he got home. He’d open the refrigerator, and I’d be thinking, “Oh, here we go again.” It was more that he fell asleep. He wasn’t present. And I had a lot of kids! So did he. I kept saying, “Why are you doing this? Why?”

He wasn’t present. Mary Ann knows what it’s like when the person sitting next to you isn’t really there. When she shows up for her two-hour shift at the Café, part of what she’s doing is simply being someone who is present.

She tells me about the first time she walked into a support group for people who live with alcoholics.

And I walked into this place and a friend I knew from church was there. And I couldn’t look at her. The whole time, I was so embarrassed. Didn’t even occur to me that if she was there, she’s got the same thing.

My gosh. I’ve got a friend. That moment right there is the simple heart of what goes on at the Recovery Café. People show up for one another – and Mary Ann knows first hand what it means to have shame miraculously transformed into relief, just because someone who understands shows up when you need them. An open heart. A listening ear.

That’s not to say, of course, that everything in her life was suddenly easy. Years of struggling to keep kids and home on an even keel followed that moment, and on nearly every day of those years Mary Ann was confronted with the sight of Bill’s still-vacant eyes. The children were an ongoing challenge.

One day one of my sons said something to me. And I was so upset I started crying. My husband was there, but he didn’t get mad at his dad — he got mad at me.

And I left the house with nothing. Not a penny in my pocket.

And I was crying, walking up the street, walking and walking and I was furious. Furious. Never going back again. I had always said that I promised I would stay . . . and I was not intending divorce, but I was not going to live with him at that point. And it was still — he wasn’t mean. But he wasn’t present. He wasn’t helping. And there were the kids, and they were all over the place. It was crazy.

So anyway I walked up this hill . . . walked and walked and walked. And there was this wonderful saintly woman who went to our church . . . and I knocked on her door. And I said, “Do you take in women who are running away from home?”

She gave me coffee and we sat and talked. On the sunny afternoon that Mary Ann and I had this conversation, the Café just outside the quiet room we were using was filled with members and volunteers doing exactly that. She walked me most of the way home. It’s what we do for one another, if we possibly can. We walk together. We see each other home.

For those of us who’ve lived alongside addiction, it can be hard to hold on to one of the most important elements of any relationship: respect. Mary Ann told me about the moment she regained her respect for Bill.

I was making my bed. Our bed.

Tucking in the sheets or something, and I was on his side, by the nightstand. And I was thinking that I had lost respect for him. And I thought, suppose I was the one who was the alcoholic, and he’d lost respect for me? How would I like that?

And I think that was finally, really, where I actually saw it as a disease. I could accept it. I mean I thought it, and I said it before that, but I didn’t get it until right then.

That insight is precisely what makes the Recovery Café possible – the deep conviction from every member, every volunteer, and every person on the staff that each of us, no matter what, is worthy.

So, Bill did eventually find his way into recovery, and he spent the last sixteen years of his life sober. He passed away in 1997. Mary Ann made a decision in 2011 to sell the Bellevue house and move to a retirement community in Seattle. The Mirabella happens to be just across the street from the Recovery Café, and she recognized the name because an old friend was a former board member who had spoken about what happens here many times. She got settled and then decided to give volunteering a try.

I moved in September and I came here in January for orientation . . . people would ask what I do over here, and I’d tell them that I listen.

Her hearing was a problem, though, especially because she needed one cochlear implant and didn’t get it until recently.

It was hard, and I’m also shy. And I’d be here wondering who to talk to and what to say and whether I’d be able to understand them . . . but somehow I kept coming back.

Of course now after three years there’s always somebody to say hello to and get comfortable with.

Like all the volunteers at the Café, Mary Ann knows that her service is as much about her own life and way of being as it is about the members’ lives. There are the obvious gifts that arise from every genuine connection – friendship, laughter, learning, shared interests, warmth, for example. But there’s also the unexpected; in Mary Ann’s case, the work in the Café carries out of the building. Being with the members and other volunteers has made downtown Seattle a place where she feels at home.

I’ve learned how to talk to people on the street for the first time. I like bumping into people in my neighborhood. You do get connected. It’s wonderful.