That’s how Victor answered when I asked him over coffee what his life is like now. It stopped me in my tracks. Look at the sheer simplicity and wisdom of his three daily objectives. 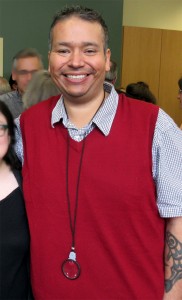 He could have started with the fact that he recently got a job as development director at a Seattle nonprofit, after years of being unemployable. He could have mentioned that he was admitted last fall to a prestigious masters degree program at Seattle University. Or he might have said that he’s certified in Chemical Dependency, or that he’s a recovery coach, a trainer of trainers, and a leader at Recovery Café. We did get to all that, but front and center for Victor are the three daily goals, said aloud each morning.

That he knows, without hesitation, that these things are what matters most points directly at the heart of his story and his character. Before crystal meth, Victor was living pretty well. He was working in nonprofit service organizations, taking care of others.

That job history became, for a while, sort of a bitter joke told on himself.

The terrible trajectory out of that productive life could easily have been permanent.

Being addicted to crystal meth . . . no one ever tells you that you’re going to go insane and lose everything. I never thought that would happen. I always had this ego mind-frame, like, that will never happen to me. I was still trying to help everyone else.

An accident in 2009 changed all that. Victor’s eyes were damaged; his retinas had detached but the doctors couldn’t see that because of very bad cataracts in both eyes. After the surgery to repair the cataracts, it was too late to re-attach the retinas. Victor was legally blind.

All of a sudden I couldn’t see people. I couldn’t walk down the street by myself. I really just sank into a deep depression. At that point I had used crystal meth on a recreational basis once in a while . . . I had tried it. And then once I wasn’t working any longer it became a daily thing.

Looking at the calm, self-possessed, well-spoken young man across from me, it’s hard to imagine exactly how the terror of that time ever gave way – as it clearly has – to clarity and peace.

So it was my first time out alone. I left my apartment. I hit a telephone pole in the face on the way there. I finally found my milk and my cereal. I was in tears the whole time, but I was bound and determined to do it myself.

And this was probably an hour and a half process, because I could only see 3 inches in front of my face. I think I knocked down oranges at the display because I ran into it. And I finally got my cereal and I got my milk, and all of a sudden I can hear these clothes hangers knocking against each other. And this lady said, “Can I help you?”

And she said, “You’re in Urban Outfitters.”

Somehow I’d walked out of the Broadway QFC and into the store next to them, cause they’re kind of connected in the Broadway Market. I had no idea I was standing in a clothing store trying to buy my milk and my cereal.

I was going blind at the same time that I was in this active addiction.

We talk about isolation a little, and how much the smallest gesture of kindness can mean.

I remember one of the changing points was when I was at QFC. And I — you know, I couldn’t see people. No one would say hello. I couldn’t see anyone to say hello to. There was no eye contact. And I went and I think I got some laundry soap, and I got some quarters in change. And just the cashier grabbing my hand and putting the quarters in my hand — that human touch — like, I bawled the entire way home. Someone just touched my hand . . .

This is the moment when I start to appreciate how lonely he must have been. I am picturing that generous grocery clerk taking Victor’s hand and carefully putting the quarters into his palm, giving him what was his but also something of herself. I couldn’t see how he’d ever found a path out of that profound isolation. It turns out that one day he literally yelled in sheer frustration, alone in his apartment and unable to find one of his shoes after an hour of crawling the floor. A neighbor phoned for help.

The police came and the ambulance was called.

And they said, “Do you need to go to the hospital?” I’d been up for several days and they took me to Harborview. And they gave me fluids and let me rest because I’d been up for so long. And later the police officer came, out of uniform, just to check on me.

And she was like, “Hey, I did some checking around, just with some people in your building . . . and they told me how you used to be.”

She understood that something had happened to me to make this situation. And the fact that she took time out of her own schedule to make sure that I was okay and to say, “This isn’t you. As a police officer I know that this isn’t you. This isn’t your lifestyle. This isn’t the type of person that you are. Can we offer you any encouragement? What do you need?”

To me that was a pretty huge moment. This person actually cared.

The obvious question, then, is how the Recovery Café came to be part of this remarkable story.

I came here. I heard about it in outpatient treatment. I was kind of expecting a rundown organization that was kind of small and didn’t have a lot of resources. I was blown away when I walked in.

For those who haven’t visited the Café, you need to imagine a lively, open, clean, warm space. The colors are moss and pumpkin and goldenrod. There are giant framed images of Gandhi and Dr. King and Sojourner Truth. There’s art. People are playing cards, or talking quietly, or sometimes laughing uproariously. There’s always coffee, and food at mealtimes is plentiful and delicious. It’s a little like your favorite aunt’s kitchen, only super sized and filled with friendly neighbors.

I just came and was part of a circle that became really close. We’d hang out here and play games on the weekend or watch a movie or just have conversations. Those are the people that are my best friends today, still. The people that I’m able to count on.

The Recovery Café is in the business of making family. For lots of people – for Victor in the rough, uncertain months of struggling to get his life back, it’s a refuge like no other. You might think that he’d be ready to move on and leave this place behind. You’d be wrong. Victor’s days are full now, but he’s still around at least once a week, still showing up, engaging with life, and staying teachable. Those are still the goals.