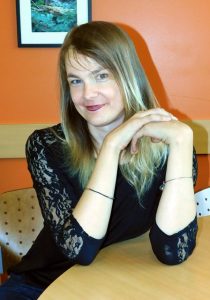 When you ask Cera how her day is going, she typically beams back with a huge smile and exclaims, “Oh just awesome! I am all rainbows, sparkles, butterflies, serenity, and love!” Her presence at Recovery Café each day emanates sheer joy and light as she greets staff and Members with authentic curiosity, humility, and warmth.

Cera first came to Recovery Café after many years of feeling trapped in the cycle of addiction, survival prostitution, attempted recovery, and relapse.  Growing up a trans woman in Texas, Cera rarely felt she fit into the mainstream society around her. Though her family and friends knew who Cera really was, she remained closeted for much of her life. “It was different then,” she recalls. Nonetheless, Cera used her intelligence and drive to build a successful career as an IT consultant for a major Colorado oil and gas company, and later launch her own startup as Chief of Technology.

Though she was always brilliant and successful in her career, several failed relationships and a lack of healthy coping mechanisms led Cera to begin drinking heavily in her late 20s. She recalls feeling like her drinking was a “normal” way to find peace and to cope with her emotional pain. Over the next 5 years, Cera would turn to harder drugs for this sense of security and peace, leading her to eventually become addicted to amphetamines. “It made me feel beautiful as a woman when I was high. I was just starting to transition at that point.” Still, Cera maintained a sense of security in her job and career success and admits to judging others who were poor or unsuccessful.

When the addiction finally caused her to lose her job, relationship, and housing, Cera turned to prostitution to survive. She remembers being so blinded by the addiction that she still did not see it as a problem, even after losing everything. Throughout this time in her life, Cera had various service providers offer temporary support, or short-term treatment to help her get sober. Though she became sober several times, the lack of long-term support in her life made relapse likely, if not inevitable.

It’s hard to imagine now, knowing Cera as the self-possessed, confident, volunteer barista, certified recovery coach, and source of support to so many at the Café, that when she first walked through the doors, she felt uncomfortable. She described herself as “anti-social”, and stated that she kept her head down, and did not know how to socialize with people from different backgrounds. “The music was really important to me,” Cera remembers. “I remember playing music at a jam session at the Café and just crying. It was the feeling of being surrounded by people who understood just what it took for me to be there.”

The Café provided Cera a forum and a safe place to practice socializing and loving others for the first time. “I just decided to start being friendly. And I got good feedback, so I kept going.” Recovery Café helped Cera to reintegrate into a healthy community of sobriety, where she discovered her truest self for the first time. “I am not rebuilding the life I lost,” Cera reflects, “I am building a new life that is so much better.” Cera continues to nurture her sobriety through various social programs and regular attendance and peer leadership at Recovery Café. She currently drives for Uber, and states that, while she does not make the money she used to, she is living her life for others and that is the greatest transformation possible.