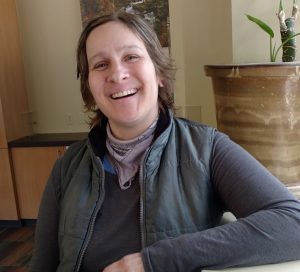 In early November, during the daily announcements at Recovery Café, Sara looked squeamish. Sara has a big personality and an even bigger smile, so squeamish is rarely an adjective used to describe her.  When asked if any Members have an announcement, Sara slowly raises her hand, she can barely contain herself. She smiles, and uncharacteristically quietly says, “I think I may be getting an apartment.”

Sara is a native Northwesterner. Born and raised in Kent in South King County, Sara has spent the majority of her life in the Seattle area. In 2005, Sara was living with her boyfriend and actively drinking and using methamphetamines, while irregularly managing her mental health. Unemployed, her boyfriend was not able to pay for both the rent and their active drug habits. They were evicted from their apartment in Belltown and Sara entered homelessness for the first time.

She then moved to Yakima to be with her mom, who managed housing for seniors through the Department of Housing and Urban Development (HUD). Her mom was able to support Sara, who continued to drink heavily and use meth. Her mom knew Sara was drinking heavily, and though Sara expects that she does, she doesn’t know if her mom knew about the meth use. As always, Sara explains in full candor that she’s still working her way through the 12 steps and hasn’t yet made amends with her mom.

Sara continued to live with her mom when they moved to Issaquah for her mom’s job. Sara, still active in her addiction, worked to stay in her mom’s good graces, helping keep the house clean and have meals prepared each day. In 2012, Sara’s mom shared that she was moving to Idaho, this time without Sara. Still with her boyfriend, who was now actively selling drugs, Sara entered homelessness for the second time.

The two of them started couch surfing, staying with different friends. Sara was now using all of her money on alcohol and drugs and quickly started burning bridges, including after staying with one of her oldest and closest friends, who told Sara she could not stay with him anymore. Sara and her boyfriend started having problems and soon broke-up. Sara now found herself alone and still struggling with drinking and meth use.

Sara then started staying at WHEEL’s Women’s Shelter which moved to a church by Seattle Center. After meeting her new boyfriend, Scott, who she’s still with, the two started to sleep outside together, occupying a doorway to a Veterinary Office that they tried to vacate every morning before any staff arrived. There they had two neighbors, Linda and Sweet Stuff (Sweet Stuff had been experiencing homelessness for over 20 years), who told them they could get breakfast, take showers, and do laundry at the Community Psychiatric Clinic (CPC) in Belltown.

In September 2015 Sara decided to go to CPC after being barred from the Seattle Center because of her drinking and self-medication. There she was assigned a case manager; someone who could help manage her mental health and get her on waiting lists for permanent housing. But then, within a month, two of her friends, including Linda, died. Sara knew then that, “If I didn’t do something today, I’ll become like Sweet Stuff. It scared the crap out of me.”

Sara decided to do the intake for CPC’s Substance Use Disorder Services (SUDS) program. Scott started going to CPC with Sara as well. Sara subscribed immediately to the AA practice of HOW (Honesty/Open-Minded/Willing) and started working the program. “When you strip everything down, who I am fits well with recovery,” Sara says.

She became a daily presence at an AA meeting held at the Matt Talbot Center. Challenging herself, she often chaired the meeting 3 or 4 times per week, giving her leadership opportunities and forcing her to share her story for group first. Sara packed as much stuff as she could at CPC between 8 and 2 every day before going to this meeting, filling her time with self-work.

Now in transitional housing at Harbor House, Sara was starting to stabilize, until 2017, which brought more deaths of Sara’s friends and loved ones. To prevent relapse, Sara spent all of her time at AA meetings, SUDS, her Women’s Group, Anger Management sessions, and at Dialectical Behavior Therapy (DBT) sessions.

At one of her SUDS meetings, she met Steven, who has been an active Member at Recovery Café since February, 2018. Now in June of 2018, Steven brought Sara to the Café. She immediately loved being around the people at the Café. Always the busy body, Sara started coming early every day to the Café to help set-up and volunteer for the day.

In an off chance, Sara heard Recovery Café Founder Killian Noe on the radio one early Sunday morning. At her New Member Introduction she jumped on the chance to be in Killian’s Recovery Circle. 6 months later, Sara now facilitates the circle anytime Killian is gone, and she will be in the next Recovery Coach Training held at the Café. She thinks this training could be a good segue into work as a peer-support specialist.

Sara is an avid learner; she loves reading, loves etymology (the study of words and their meaning), and loves crosswords. She immediately started taking classes, including SMART Recovery, but none have been as meaningful as the Friday Safe Place for Writer’s Circle. Sara often writes about her experience being homeless, especially her time sleeping in the doorway at the Vet’s office. She wants the people at the office to know, even though they won’t read her writings, that Sara is a good person, who was desperate and in need of shelter. Sara uses the writing class to learn about herself and continue her personal growth.

Now, Sara is the warm, welcoming presence that is so important to the ethos of Recovery Café, and is often seen hugging and talking with other Members. On her time at the Café, Sara says, “It’s more than I ever could have imagined. I want other people to experience the joy here.”

For the last 3 years Sara has worked hard to get where she is, and on November 27th she signed her lease for permanent housing. It’s a new transition, but Sara knows she has a support system at Recovery Café to get her through it. She’s excited about paying bills and relearning how to keep a refrigerator stocked.

Sara and Scott drove out to Idaho a few weeks later and rented a U-Haul. Her mom had kept all of her personal belongings in storage and gave Sara new chairs and other furniture. Sara has made tremendous progress but she recognizes that she still has some ways to go. “Everything in its own time,” she says.

Towards the end of our conversation, Sara looks off for a moment. Sara often looks into the distance. She’s thinking, carefully, about the specific words she wants to say. After a few seconds, Sara says, with her usual smile, “I have a lot of issues. But as long as I tend to those issues…and give people hugs, I’m ok.”