Mr. Markus Meaney searched through his shiny leather wallet to produce an equally pristine photo of himself before he lost his home, wife and livelihood. He held it up and handed it to me reverently, as ‘proof’ that he was physically in shape, clean-cut, and emotionally well-adjusted at one time. Even though there is very little perceptible difference between the 2-D image and the man who sat before me, the photo on Markus’ state identification card holds a symbolic meaning to him of an earlier, better time. Markus has been transient for several years and hates the insecurity that goes along with being homeless, or as he jokes “domicile-impaired.” 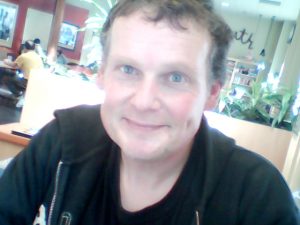 He believes it is the antithesis to his identity as a fully independent adult. Markus considers Recovery Café to be “a unique space in that it doesn’t reek of charity.” He reports that many other social service agencies he’s passed through “make you feel like you have the plague, and that plague is poverty.” Markus harbors the fear that “people are never happy to see you because you bring poverty to the table.” However, we consider ourselves extremely fortunate to have Markus in our healing community. He not only brings his skills as a barista, but he also makes our shared space warmer and livelier simply by being himself.

Markus developed a substance use disorder after his marriage of 21 years dissolved. His drug use escalated and he began missing time at work to accommodate his addiction. Markus was eventually fired from his job. Now after sustaining three felony charges, it is difficult for him to pick up where he left off in his career. If given the opportunity he would like to go back to school and train for a job that will utilize the wealth of knowledge he’s acquired to help others get back on their feet. He says he wants a skilled job, not just to be a sanitation [engineer] or “shooting range target.”

Markus tried his hand at unscrupulous work to make ends meet, but quickly found that he just wasn’t suited for a life of crime. “I didn’t want to become the type of criminal I needed to be to maintain that lifestyle,” he says, “I’d have to exploit someone in an abysmal way…I couldn’t cut it as a drug dealer because I was too nice.” Markus even tried to steal a brand new car off the dealership lot and sell it to a couple of fellows who operated a chop shop. “Turns out they were cops,” Markus laughed, “How dishonest.”

A former customer of his recommended recovery support at the Café. I asked Markus what was the first thing he did after realizing he needed to assume a healthier lifestyle and address his substance abuse disorder. He replied honestly, “I got high. Then I acknowledged that I’d been beaten, and I surrendered, and I went to a methadone clinic.” He has been a Member at the Café for more than three years and has relapsed occasionally, but Recovery Café has been the sturdy foothold keeping him anchored in a supportive community while he gains stability.

Markus took pride in never falling seriously ill or having undergone a major operation, but was blindsided by unexpectedly losing his sight in early May during a relapse. Markus returned to the Café for the opportunity to receive healthcare through our partnership with a group of medical professionals allied with the Public Health Reserve Corps (PHRC), as well as Dr. Hoock, from Group Health who manages our Mini Clinic’s monthly medical services and wellness presentations.

One day I was smoking methamphetamine, and without pain or warning I lost vision in my right eye. I thought it was punishment for my years of [drug] use. I was afraid to go to the doctor because he’d say that I am a degenerate and that I deserve what happened to me.

His symptoms were evaluated by Cheryl Berenson, RN – who initiated the volunteer group of PHRC professionals four years ago to provide free health screenings, referrals, blood pressure readings, and foot care to our Members each month. “It’s a very humanizing way to connect with people.” Cheryl says, “And we have a more compliant, approachable group of self-starters; they are in the mode of wanting to help themselves.” Markus actively sought assistance during the nurses’ visit and was immediately introduced to Cheryl, whose pet peeve just happens to be a pervasive lack of access to affordable vision care in Seattle.

He was complaining about his vision, and when I talked to him his symptoms were eerily similar to those of a detached retina. He told me that he was losing his vision and was seeing bright lights like laser beams – and that’s really diagnostic of a detachment.

Markus had gone to the Emergency Room the day before, but after a brief visit and an inconclusive diagnosis, he was scheduled an appointment for 6 weeks out. Markus felt rejected and overwhelmed. And unfortunately, this experience is telling of the regular treatment he has received in many hospitals. “The care you get is hostile at worst and perfunctory at best.” Markus says.

During his consultation at the Café, Markus was scheduled an ophthalmologist appointment by Dr. Hoock for the following day. “It’s so much easier to be overly cautious,” Cheryl explains, “So many doctors are not aware of these dangerous symptoms and don’t have a high index of suspicion for identifying [the underlying cause]. You have to be another set of eyes and ears.” Markus went to an eye facility and was quickly diagnosed with a detached retina. He was told that if he didn’t receive a corrective procedure his vision would completely fail. Emboldened by his experience at the Café and the fear of permanently losing his sight, Markus agreed to let the physician perform this invasive surgery.

The surgery was successful and afterwards, he was placed in respite for two weeks to recuperate. The prompt and excellent service surprised Markus, but he was absolutely floored by the absence of judgement. “I asked [the doctor] if this happened because I am a dope fiend. He told me ‘No. It happens to many people regardless of drug use.”

Once Markus was released from hospital care, he returned to Recovery Café to continue volunteering as a barista. He is now on the mend and the vision in his right eye has already improved by 50%. This healing community is made possible by the kindness of so many people including our donors who make this space possible as well as the gift-in-kind and volunteer support of the PHRC and Group Health. We are hopeful that the gift of restored vision is a catalyst for Markus to attain the life he wants as he pursues a better future.